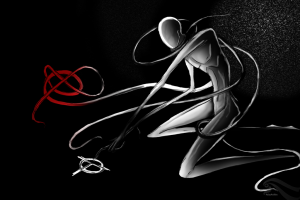 I created this playlist for inspiring music:

Black screen. We start to hear someone breathing, like someone in stress or running from something.

Close shot of a grey wall. A young man face enters the shot from the left. He is short of breath and looking to both sides, afraid of being seen.

The shot opens to medium shot and we can see the man looking into a corridor, making sure nobody is there, and starts running into the corridor.

Long shot of a grey wall. We can see a girl entering the shot from the right. She is in constant alert, looking to both sides and also breathing heavily. After a second to catch some breath she runs out of the shot through the left side.

Long shot of a big empty room. The boy and the girl enter the shot from both sides running and stop just after 2 or 3 steps. They look at each other and smile for a second. Then they look around nervously to make sure there is nobody there.

They take one step forward but they cannot go further, they hit an invisible wall. They seem desperate to be close to each other, to break this wall.

They look deeply to each others eyes. Then the time seems to stop. They start leaning forward in slow motion, almost still.

An aura starts to surround the boy and the girl and an avatar emerges from each one.

The real characters remain in a slow motion/almost frozen state. The avatars start to approach to each other first slowly but increasing the pace and begin to dance together, in different paces and with passion.

After a few seconds, the avatars go back to the boy and the girl. The time goes back to normal.

They look at each other and say goodbye with their eyes, sadly but with a different energy than at the beginning.

Then, looking carefully to both sides run from the shot on opposite sides

It could be a future where we expose everything. It could be like living in a Zoo cage, everything is visible from the outside.

A fixed shot will show a man doing some intimate actions, things that we normally won’t show to anyone. After a minute, the camera will open to show that he is in a glass cage, inside of a Zoo.

It can also be in an alien/robot world.

What would happen if we live in a world where there is no real intimacy anymore?

What if every second of our lives is recorded and broadcasted anywhere?

In this case we might need an Intimacy Museum to show what intimacy was. There will be different stations showing intimate moments.

Long big corridor with big glass windows where we can see a series of intimate moments.

If everything is recorded and broadcasted, will we have a new type of intimacy?

Will we be able to have only internal intimacy?

Will be only secret intimacy?. What if intimacy is forbidden?

A man and a woman are chased by some kid of guards. They are separate but we can see them in turns. The guards can be some kind of robots.

We can see them running and hiding until they meet each other to have a secret moment of intimacy. Maybe something simple like laying down together and caress each other in silent.